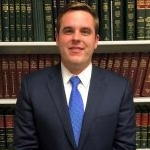 A Cape Cod native, Christian is an avid sailor and competes in regattas every summer. Christian is also a graduate of Tabor Academy.