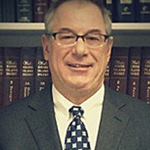 SERVING THE PEOPLE OF RHODE ISLAND FOR OVER 30 YEARS

Attorney Gregory S. Inman is one of the founding partners of Inman & Tourgee. Along with Mark Tourgee, heestablished the firm in 1990—and ever since then has been actively engaged in litigation and trial practice. Attorney Inman handles legal matters involving personal injury accidents, family law issues,criminal charges, and more.

After attending Fairfield University and receiving his B.A. in 1982, Inman enrolled at Seton Hall University School of Law and received his J.D. in 1985.

Since 1997, Inman has been the president of the Kent County Bar Association. This honor, in addition to his other bar associations, is a result of his commitment to his career and has helped him keep abreast of changes in the Rhode Island legal system.

Attorney Inman concentrates his practice in the areas of personal injury actions, both plaintiff and defendant, domestic relations, criminal law, municipal law, and civil litigation. He has intensely studied each area of practice and has yielded successful results in all of them, as his clients will attest.

FOCUSED ON ADVOCATING FOR HIS CLIENTS

As one of the firm's founding members, he is dedicated to maintaining Inman & Tourgee's prestigious reputation. His clients have praised him for his sensitive approach to their cases and the thorough direction he provides. Keeping clients informed is one of his priorities, as it keeps them up to date, and helps him discover new details for their cases.

Mr. Inman is available by appointment. Call (401) 823-9200 and give your details to the receptionist to set up a meeting. Contact us today!