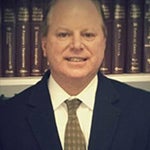 Mark D. Tourgee is one of the founding members of Inman & Tourgee. With his name on the building, Mr. Tourgee knew from the start that he needed to make a firm commitment to both his practice and his clients. As such he has worked tirelessly as a Rhode Island lawyer to earn the prestige his firm now so rightfully deserves.

Mr. Tourgee and his firm's co-founder, Gregory Inman, grew up together and have practiced law side-by-side their entire career. In 1990 they opened Inman & Tourgee, and have spent the past 30 years as active members of the Rhode Island legal community. As both had expansive knowledge in several areas of law, they decided to make their firm full-service in order to better assist the people of Rhode Island.

KEEPING YOU INFORMED EVERY STEP OF THE WAY

In his 30 years of practice, Mr. Tourgee has taken on hundreds of cases, some ending in settlements, others going all the way to trial. His experience combined with his numerous practice areas have given him intimate knowledge of how the court system works. This has allowed him to provide clients with invaluable guidance during their cases.

Mr. Tourgee believes in the importance of providing a personal touch, and he places special emphasis on keeping regular contact with his clients. You can set up a meeting with Mr. Tourgee by calling (401) 823-9200.